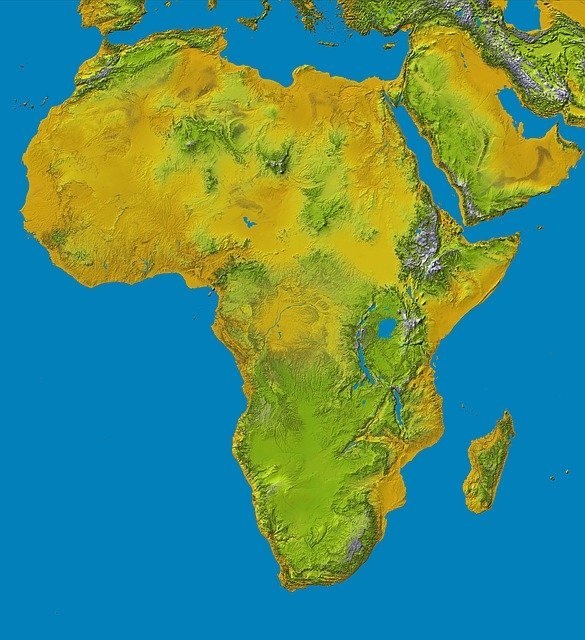 To extend your locational knowledge and deepen your spatial awareness of the world’s countries using maps of the world to focus on Africa.

To focus on the environmental regions, key physical and human characteristics, countries and major cities.

To build on your knowledge of globes, maps and atlases and apply and develop this knowledge routinely in the classroom and in the field.

To understand human geography relating to: population and urbanization; international development; economic activity in the primary, secondary, tertiary and quaternary sectors; and the use of natural resources.

For this study day we will be looking at the general characteristics of the continent, but also taking a deeper dive into a couple of the countries. I have chosen one of the smaller and lesser known countries for you to investigate, along with a better known State.

Session One – The Continent

Here’s a fun little video. The speaker doesn’t know how to pronounce Wildebeest, but English possibly isn’t his first language so I don’t think it matters too much. It’s a good video.

More info about Africa and its history here.

The African diaspora consists of the worldwide collection of communities descended from people from sub-Saharan Africa, mainly in the Americas.

We are going to look at the regions of the African Union. This is not the only way African regions are divided.

Explore this Interactive Map of Africa and then try on this quiz.

The following is the list of Northern African countries. Mauritania is considered to be part of West Africa if you are not looking at the African Union. Western Sahara is a territory, not a country.

There are 15 countries and one territory in Western Africa.  The population of West Africa is estimated at about 381 million. Islam is the predominant religion of the West African interior and the far west coast of the continent (60% of West Africans); and was introduced to the region by traders in the 9th century.

The following is the list of Western African countries. (Saint Helena is a territory, not a country). Mauritania can also be included.

There are 14 countries in Eastern Africa. South Sudan gained independence from the Republic of the Sudan in 2011, making it the most recent sovereign state or country with widespread recognition. Several of these countries are islands. Madagascar is the world’s second-largest island country.

The following is the list of Eastern African countries:

There are 6 countries in Eastern Africa. Central Africa is primarily inhabited by Bantu peoples and Bantu languages predominate. The predominant religions of Central Africa are Christianity and traditional faiths. Islam is also practiced in some areas in Chad and the Central African Republic.

The following is the list of Central African countries:

Southern Africa is home to many people. It was initially populated by indigenous or native Africans San, Khoikhoi, and Pygmies in widely dispersed concentrations. The process of colonization and settling resulted in a significant population of native European (Afrikaner, British, Portuguese Africans, etc.) and Asian descent (Cape Malays, Indian South Africans, etc.) in many southern African countries.

(Angola may be included in Central Africa and Malawi and Mozambique in East Africa).

A diaspora refers to people settled far from their ancestral homelands.

The African diaspora consists of the worldwide collection of communities descended from people from sub-Saharan Africa, mainly in the Americas. The diaspora has continued for millennia, but historically the term refers to the descendants of the West and Central Africans who were enslaved and shipped to the Americas via the Atlantic slave trade between the 16th and 19th centuries. Their largest populations in Brazil, the United States and Haiti. Prior to the Atlantic slave trade, Arab traders took slaves from other parts of Africa, selling them to markets in North Africa and the Middle East (Western Asia).

Where is the African Diaspora?

Print out this PDF and identify some of the countries that have members of the African Diaspora. Try to show which African countries they come from and give an approximate population, along with any other interesting information.

First a quick word about Countries and States…

There is a difference between the terms nation, state, and country, even though the words are often used interchangeably.

Country and State basically mean the same thing. They have Sovereignty from outside sources or bodies. This is the full right and power of a governing body over itself, without any interference.

A nation is a group of people of the same ethnic family who share the same culture but do not have sovereignty. They often speak the same or  similar languages.

When the “s” of state is lowercase, it constitutes a part of a whole country, such as the different states of the United States of America. When the “S” of State is uppercase it signifies an independent country. The United States of America is a State or Country. The state of  Minnesota is a part of the country (it is not sovereign). Africa is part of a geographical Continent and a Union. The purpose of the African Union is to achieve greater unity between the African countries and the African nations.

There may be a time in the future when Africa will become The United States of Africa and then it will be one country, much like the USA, but right now each African State is sovereign.

This is a list of African States / Countries and their Capital Cities:

Connect your regions together.

The tropical climate zone has hot summers and winters. During the summers rainfall occurs due to the influence of trade winds from the sea and during winters the climate is drier. The vegetation and animals found in this area correspond to those of the tropical forest, the trees are smaller and the soil is more clear.

Its climate is varied: The subtropical climate zone has warm summers and mild winters. Temperatures vary according to height. The rains fall in winter in the north and are distributed throughout the year to the south. The vegetation and the animals that are in this zone correspond to those of the subtropical forest and savannah. Man has modified the landscape using the land for the practice of livestock and agriculture.

Only the high mountains of East Africa have cold climates due to heights. Being near the sea, it receives humid winds that produce important rains, especially in summer.

The desert areas have totally sterile soils. They present summers are very hot, the winds dry and the rains almost nonexistent.

Look back here to remind yourself of the features of the biomes. 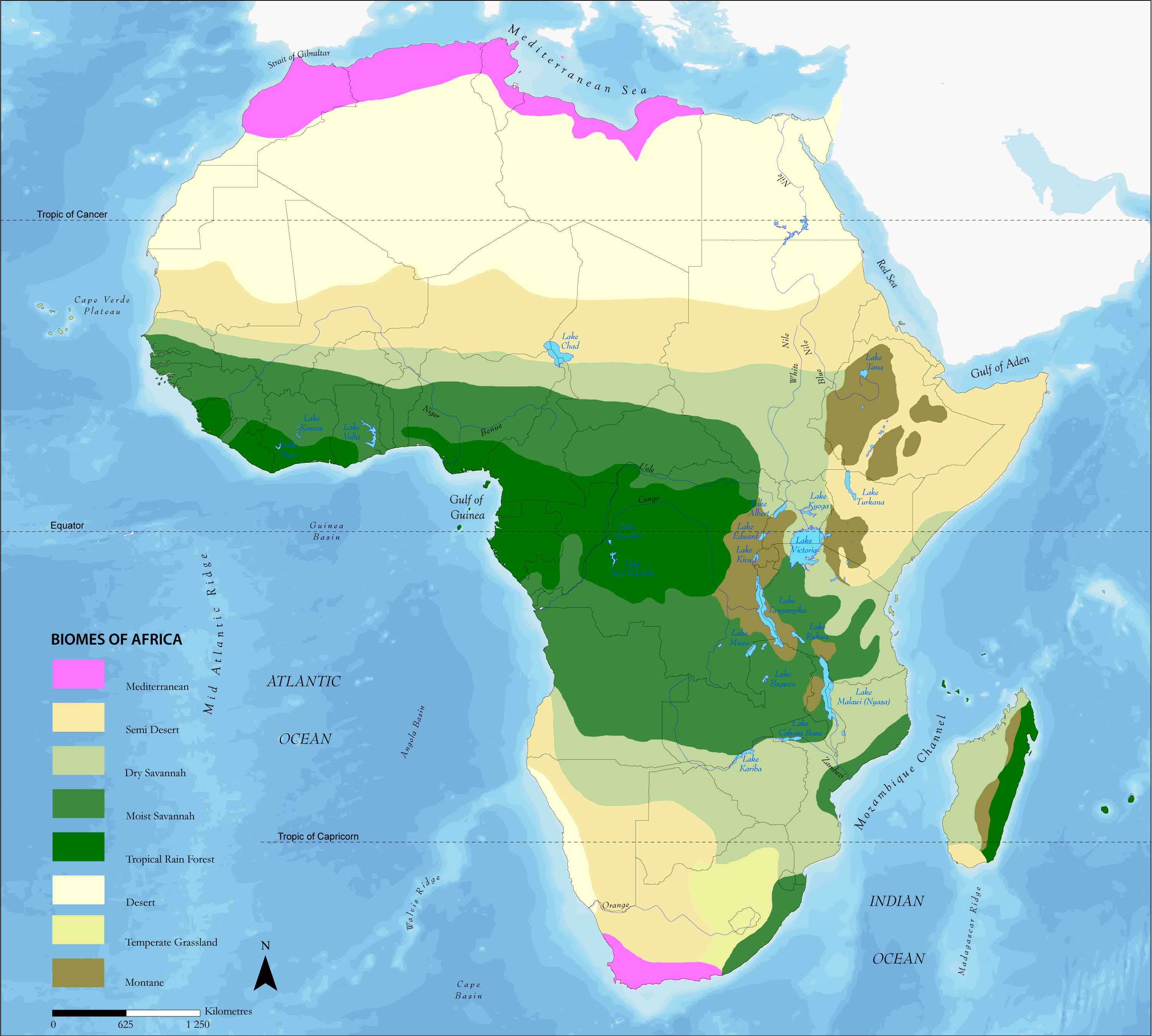 Complete biomes map. You can use these or I have a hand-painted one for you.

Cameroon is geographically and historically in West Africa. The country is sometimes identified as West African and other times as Central African due to its strategic position at the crossroads between West and Central Africa. Cameroon is home to over 250 native languages spoken by nearly 20 million people.

Session Eleven – Union of the Comoros

The Comoros , officially the Union of the Comoros, is an island country in the Indian Ocean located at the northern end of the Mozambique Channel off the eastern coast of Africa.

The capital and largest city in Comoros is Moroni. The religion of the majority of the population, and the official state religion, is Sunni Islam.

The Comoros is the only country in the Arab world which is entirely in the Southern Hemisphere.

The Union of the Comoros has three official languages—Comorian, French, and Arabic.

Choose an African country and create a report or poster about it.

Create a poster or report for the African country of your choice.

This work is assessed. Create a cover sheet and contents sheet. Ensure dates and names are included.

Test your subject knowledge of the African Union.