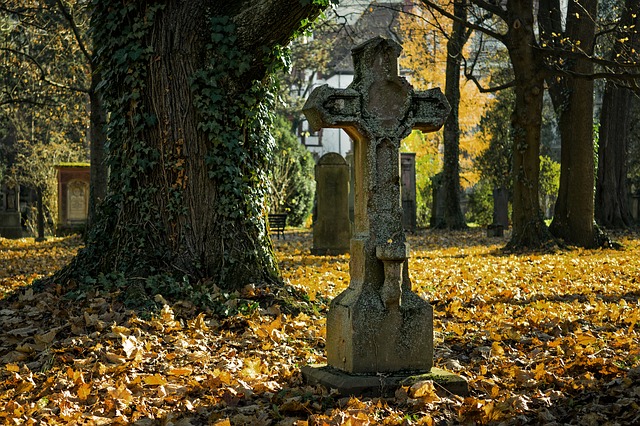 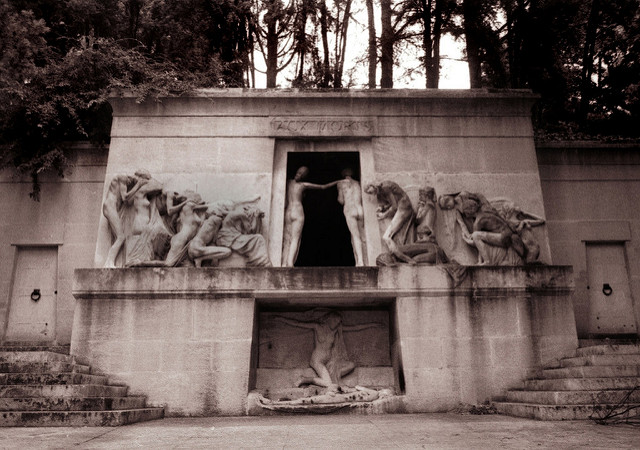 This is a picture of the Monument to the Dead and/or other statues in Pere Lachaise Cemetery in Paris.

His reputation was established with Monument to the Dead (1895) in the Père-Lachaise Cemetery, Paris, a piece of architectural sculpture on a grand scale.

Composed as a two-story wall monument with a procession of people entering the “door of death” over a niche where a nude young family clings to one another in death.

What do you think the sculptors were trying to say about death?

What do you think that death means?

What do you think about death?

How does the word ‘death’ make you feel? Have you ever heard the expression “a good death”. What might that mean?

How do we express sadness? 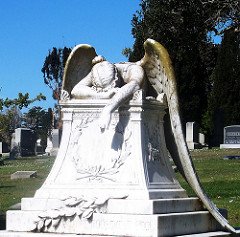 Different belief systems and cultures have different ways to express sadness. The period of sadness after death is called mourning, but people can mourn other things as well, like the loss of a favourite toy, or having to move house or country.

William Wetmore Story originally sculpted this statue, known as “The Angel of Grief”, for his and his wife’s graves in Italy. It has been re-carved countless times and appears on graves around the world. What does it express?

There are a range of beliefs about life after death, including the idea that this is the only life we have, and that no aspect of us survives death. There are also a variety of beliefs about the nature of any possible afterlife (e.g. it is a better place known as heaven or paradise) or that there might be another or a succession of lives on earth through reincarnation.

Task 1: Draw your own grieving figure. Surround them with words that describe their emotions.

Christians believe that Jesus rose from the dead, and that this has implications as regards what believers think will happen to them after death.

(Note: This video is for an exam unit, please ignore references to this – you aren’t doing an exam on this! It’s just a good and concise video)

This is a painting about death called “Ascent into the Empyrean” by Hieronymous Bosch.

What do you think the artist is trying to say about what happens after death? have you ever heard the expression “light at the end of the tunnel”?

Why do Christians believe in life after death?

Task 2: Look at these Bible quotes.

Why do Christians believe in life after death?

Session 3 – Sikhism: The Cycle of Rebirth.

In Sikhism, death is understood as a natural part of life. When a good person dies, it is believed he or she will enter into union with God. Although Sikhs believe in the passage of the soul after death into another body, they also believe that the human form is the last incarnation before one experiences freedom (liberation) from the cycle of life, death and rebirth. This liberation occurs to those who have lived their life in accordance with God.

‘Sitting shiva‘ is a term used to describe the action of Jewish mourners participating in the traditional rituals of observing a shiva . During the period of shiva, mourners sometimes sit on low stools or boxes while they receive condolence calls .

Jannah is often compared to Christian concept of Heaven.

The Paradise of Jannah is described as surrounded by eight principal gates, each level guarded by angels. Entrants will be greeted by angels. Paradise (Jannah) is considered to be “as vast as the heavens and the earth”.

In the Quran, “the Garden” is described with material delights, such as beautiful maidens, precious stones, delicious foods, and constantly flowing water. Life there will be happy—without hurt, sorrow, fear or shame—where every wish is fulfilled. Those who live in Jannah will wear sumptuous robes, bracelets and perfumes and partake in exquisite banquets served in priceless vessels by as they recline on couches inlaid with gold or precious stones.

According to Muslim belief, everything one longs for in this world will be there in Paradise.

The 8 Gates In Jannah.

1.Baabus Salaah..those who were punctual in observing their salat (prayer)
2.Baabul Jihad..those who participated in jihad (fighting for what is right)
3.Baabus Sadaqah…those who frequently gave sadaqah (charity / giving)
4.Baabur Rayyaan…the ones who constantly fasted (going without some or all food, drink, or both, for a period of time)
5.Baabul Hajj…those who observe their annual pilgrimage[hajj] (journey to Mecca – the birthplace of The Prophet Muhammed)
6.Baabul Kadhemean al- Gaidh…this door is reserved for those who suppress their anger and pardon others
7.Baabul Iman…this door is reserved for the entry of those who by virtue of their faith are saved from reckoning and chastisement.
8.Baabuz Dhikr…those who excessively remembered Allah.

Task 4: Create a poster explaining the 8 gates of Jannah.

Hinduism believes in the rebirth and reincarnation of souls. The souls are immortal and imperishable. Death is not a great calamity, not an end of all, but a natural process in the existence of a jiva (being) during which it recuperates, reassembles its resources, adjusts its course and returns again to the earth to continue its journey.

Death is a temporary cessation of physical activity, a necessary means of recycling the resources and energy and an opportunity for the jiva (that part which incarnates) to reenergize itself, review its programs and policies and plan for the next phase of life. Each life experience on earth and each incarnation of soul offers the jiva an opportunity to learn and overcome its inconsistencies and blemishes so that it can become the whole.