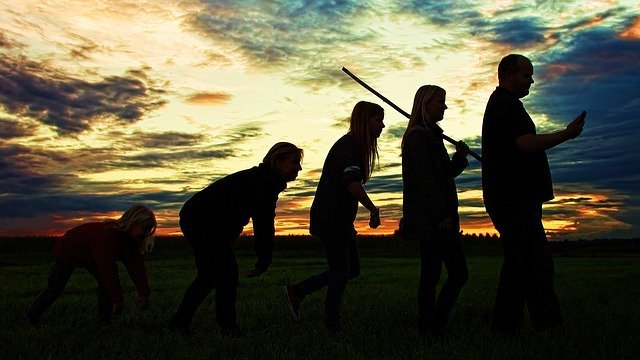 The Technical Bit for Reference:

The subject of evolution was first discussed about 2000 years ago. Little known fact!

Titus Lucretius Carus (c. 99 BC – c. 55 BC) was a Roman poet and philosopher. Lucretius was an early thinker in what grew to become the study of evolution. He wrote an epic poem called De rerum natura (On the Nature of Things). He suggested that the world was guided by chance, not the hand of any god. Other Greek philosophers of the time also proposed that one type of organism could descend from another.

Session One – The Fossil Record

The word fossil is from the Latin word “fossilis” meaning ‘to dig’. It was originally applied to any animal, plant or object that was dug out of the ground. In time, the word came to be connected with any plant or animal remains. Fossils provide us with a valuable record of the plant and animal life and the type of environmental conditions from millions, and even billions, of years ago.

Fossils can be grouped into types, according to how they were fossilized.

Sometimes an animal died in a very dry place, e.g. a desert cave. Its body would dry out quickly, without enough time to rot. This fast drying process can preserve body parts, such as the skin. The famous dinosaur fossil (Tyrannosaurus) ‘Sue’ was preserved like this.

These are the remains of the dead animal or plant that is turned to rock-like replicas when minerals replace the organic matter. For this type of fossilization to occur the animal or plant has to be buried in sediment. The soft parts decay quickly, but the hard parts, such as the bones, teeth, or shells are much harder and more durable. The process of fossilization involves the dissolving and replacement of the original minerals in the object under-going fossilization with other minerals.

These are not actually the remains of the animal but the marks, tracks, tail prints, eggs, teeth marks, animal faeces (coprolite) and burrows that show us how they behaved in life. Trace fossils are extremely important because they give us information about how and where the ancient animals lived and behaved

Activity 1: What is a Fossil?

Use the information above to answer these simple questions:

Charles Robert Darwin, (12 February 1809 – 19 April 1882) was an English naturalist, geologist and biologist, best known for his contributions to the science of evolution. His proposition that all species of life have descended over time from common ancestors is now widely accepted, and considered a foundational concept in science.

In a joint publication with Alfred Russel Wallace, he introduced his scientific theory that this branching pattern of evolution resulted from a process that he called natural selection. Darwin has been described as one of the most influential figures in human history, and he was honoured by burial in Westminster Abbey.

On the Origin of Species

Darwin’s theory of evolution is based on key facts summarised as follows (An inference is an educated guess):

Later biologists came up with a new theory of the origin of life different from that of the LUCA.

Charles Darwin did actually kind of state that black people were further down the evolutionary chain than white people and used evolutionary theory to ‘prove it.’ This is important to note and digest. Scientific racism was a thing that was used to hurt people. The greatest scientists at the time used it to exert power and gain popularity. It resulted in extermination, sterilisation, and subjugation (slavery) among other terrible and numerous events. It is vital to bear this in mind whenever discussing the area of evolution because scientists such as Darwin were either mistaken (the science was wrong) or dishonest (lying because they were racist) about this topic. Either possibility puts a strain on the cohesiveness of the whole theory in my opinion. There are those who deny this is true. For them, here are Darwin’s words:

“The break between man and his nearest allies will then be wider, for it will intervene between man in a more civilised state, as we may hope, even than the Caucasian, and some ape as low as a baboon, instead of as now between the negro or Australian and the gorilla.”

Similar scientific approaches have been made to discredit and subjugate women over the years.

There is a movie about human zoos here. It’s quite long so you might want to watch it later. It discusses how scientific racism was used to dehumanize people less than 100 years ago.

Natural Selection (Survival of the Fittest)

Evolution by means of natural selection is the process by which traits that enhance survival and reproduction become more common in successive generations of a population. It has three principles:

More offspring are produced than can possibly survive, and these conditions produce competition between organisms for survival and reproduction. Organisms with traits that give them an advantage over their competitors are more likely to pass on their traits to the next generation. Nature selects the best traits for the environment – a longer neck, sharper teeth, surviving with less water etc…

Inheritance is the passing on of traits from parents to their offspring; either through reproduction. The offspring acquire the genetic information of their parents. The study of heredity in biology is genetics.

Genetic variation occurs between and within populations. This can be seen in the different colours of flowers of the same species and lengths of tails on dogs or textures of head hair on humans. It can occur due to geographical separation, natural selection, and mutation for example.

Mutations are changes in the DNA sequence. When mutations occur, they may prevent a gene from functioning, or have no effect. It has been suggested that if a mutations are harmful in about 70% of cases and either neutral or weakly beneficial in the remainder.

Speciation is the evolutionary process by which populations evolve to become two or more new distinct species. It can be somewhat legitimately argued that true speciation has never been observed. Adaptation of one species into two subspecies has been observed but if the subspecies can still breed is this true speciation? If the only thing stopping them from breeding is geography is this true speciation? This is an area of disagreement in science. In reality, it’s fuzzy and the words species and varieties are often used interchangeably and indeed were by Darwin himself. You will observe that the examples of speciation you come across are very subtle. Enough of that for now.

Darwin wrote a further book called “Difficulties of the Theory” in which he noted “Firstly, why, if species have descended from other species by insensibly fine gradations, do we not everywhere see innumerable transitional forms? Why is not all nature in confusion instead of the species being, as we see them, well defined?”

THE THEORY OF NATURAL SELECTION

Darwin’s basic theory of natural selection, suggests that there are variations among individuals in a population. These variations help individuals survive environmental changes, predation or competition. The individuals that possess the “successful” variation, produce more offspring than others. Their offspring, in turn, reproduce again, carrying the successful variation from one generation to the next. This allows the population to evolve with the successful variation. Variation between the individuals of a species results from inheriting different genes, and hence traits, from the parents. Variation also occurs through genetic mutation. A gene mutation is a permanent change in the DNA sequence that makes up a gene. This change can be inherited by the offspring of an organism.

In this practical activity, you will investigate how natural selection occurs using various utensils to “capture food”.

Living on an island in the Indian Ocean there are three species of a bird called the Neenibeaneater. They all have similar features except for their beaks which show different variations.

All Neenibeaneaters eat beans as their staple diet.

Materials (for each person):

1. Each utensil represents a Neenibeaneater.

2. The utensil must be used in a demonstrated and agreed way.

Answer in writing and / or diagrams.
1. Which Neenibeaneater is the surviving species? Explain your answer.
2. What happens to animals that cannot compete as well with other animals in the wild?
3. Can you think of any real-life examples of the Neenibeaneater, where one species has a definite advantage over another?

4. Sometimes animals, that are introduced into an area that they never lived in before, out-compete and endanger local species. Why do you think this happens?
5. Why do some birds have very long pointy beaks, while other birds have short flat beaks?
6. How do you think diseases can affect natural selection?

Answer in writing and / or diagrams.

Explain how natural selection occurs. Use the diagram below to assist you in your explanation. 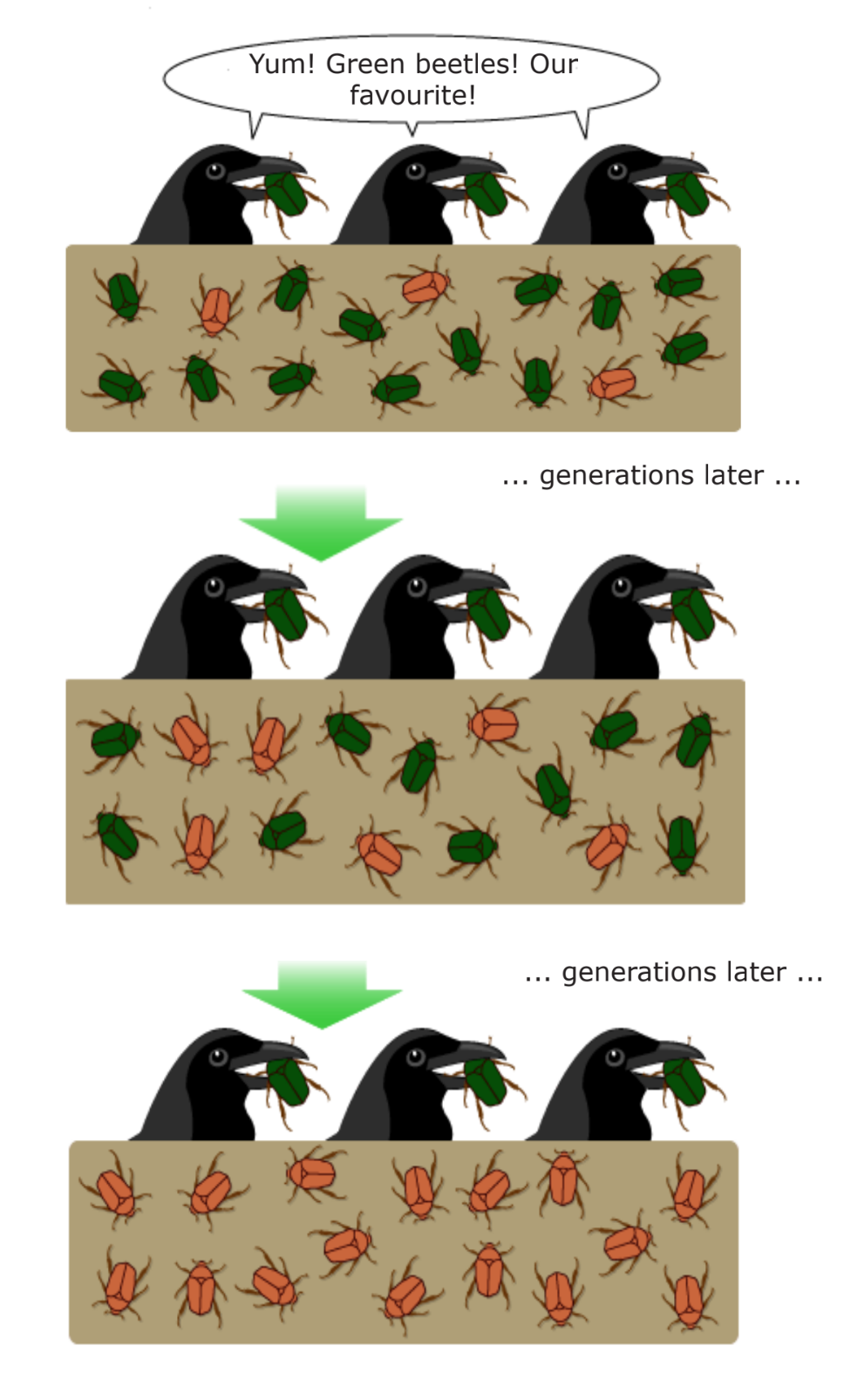 There are actually a whole bunch of alternative theories to evolution via natural selection. Some of them are still evolutionary theories. Here are a few that you might want to look up at a later date: