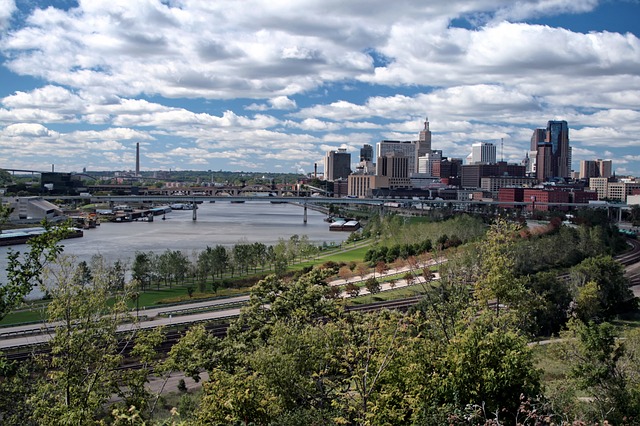 Burial mounds in present-day Indian Mounds Park suggest that the area was originally inhabited by the Hopewell Native Americans about two thousand years ago.

From the early 17th century until 1837, the Mdewakanton Dakota, a tribe of the Sioux, lived near the mounds after fleeing their ancestral home of Mille Lacs Lake from advancing Ojibwe.

They called the area I-mni-za ska dan (“little white rock”) for its exposed white sandstone cliffs. In the Menominee language it is called Sāēnepān-Menīkān, which means “ribbon, silk or satin village”, suggesting its role in trade throughout the region after the introduction of European goods.

Following the Louisiana Purchase in 1803, US Army officer Zebulon Pike negotiated approximately 160 sq mi of land from the local Dakota tribes in 1805 to establish a fort.

Fort Snelling was built on the territory in 1819 at the confluence of the Mississippi and Minnesota rivers, which formed a natural barrier to both Native American nations.

The 1837 Treaty with the Sioux ceded all local tribal land east of the Mississippi to the U.S. Government.

Many of the settlers were French-Canadians who lived nearby. Pierre “Pig’s Eye” Parrant, a retired fur trader-turned-bootlegger who particularly irritated officials, set up his tavern, the Pig’s Eye, near present-day Lambert’s Landing.

By the early 1840s, the community had become important as a trading center and a destination for settlers heading west. Locals called the area Pig’s Eye (French: L’Œil du Cochon) or Pig’s Eye Landing after Parrant’s popular tavern.

On May 11, 1858, Minnesota was admitted to the union as the thirty-second state, with Saint Paul as the capital.

That year, more than 1,000 steamboats were in service at Saint Paul, making the city a gateway for settlers to the Minnesota frontier or Dakota Territory.

During this period, Saint Paul was called “The Last City of the East.” Industrialist James J. Hill constructed and expanded his network of railways into the Great Northern Railway and Northern Pacific Railway, which were headquartered in Saint Paul.

On August 20, 1904, severe thunderstorms and tornadoes damaged hundreds of downtown buildings, causing $1.78 million in damages to the city and ripping spans from the High Bridge.

From 1959 to 1961, the western Rondo Neighborhood was demolished by the construction of Interstate 94, which brought attention to racial segregation and unequal housing in northern cities. The annual Rondo Days celebration commemorates the African American community.

Downtown had short skyscraper-building booms beginning in the 1970s. The tallest buildings, such as Galtier Plaza (Jackson and Sibley Towers), The Pointe of Saint Paul condominiums, and the city’s tallest building, Wells Fargo Place (formerly Minnesota World Trade Center), were constructed in the late 1980s.

In the 1990s and 2000s, the tradition of bringing new immigrant groups to the city continued. As of 2004, nearly 10% of the city’s population were recent Hmong immigrants from Vietnam, Laos, Cambodia, Thailand, and Myanmar. Saint Paul is the location of the largest Changsha garden outside of China (under construction as of 2019).

A Mega Excursion – some background research.

We are going to follow this route, take photos of all the destinations, and sketch some of the buildings along the way.

The Greater East Side

The Greater East Side is among the city’s largest, most populous and most diverse districts. It is in St. Paul’s northeast corner. Boundaries are the city limits on the north and east; Minnehaha Ave. to the south; and Johnson Parkway to the west.

It includes the neighborhoods of Frost Lake, Hillcrest, Prosperity Heights, Hayden Heights, Beaver Lake, Hazel Park, and Phalen Village. Built as bedroom communities for the industries located further south on the East Side (3M, Whirlpool, Hamm’s), the neighborhoods continue to include commuter homes with retail and service industries located on White Bear Avenue and in Phalen Village.

So, in conclusion, you aren’t going to find a lot of historical information about the Eastside because it’s not very old but this video kind of sums it up (It’s not historical but it’s a scene that can only exist on the Eastside of Saint Paul, MN, and that, my friend, is what makes History.)

Coming after the tour!