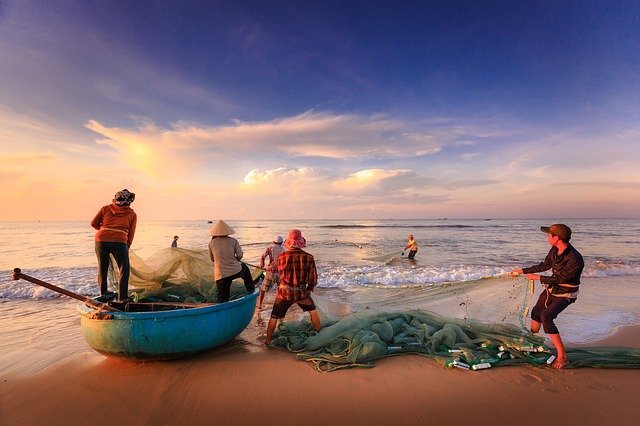 May each year is AAPI Month (Asian American and Pacific Islanders)

Asia is Earth’s largest and most populous continent, located primarily in the Eastern and Northern Hemispheres.

The continent, which has long been home to the majority of the human population, was the site of many of the first civilizations. Its 4.5 billion people (as of June 2019) constitute roughly 60% of the world’s population.

At least 21 million of European, Russian, North American and South American nationalities and heritage live in Asia, representing 0.45% of the total population of Asia. The following is a broad list of ethnic groups in Asia:

Session One – Where in Asia?

You can explore the approximate borders on Google Earth here. Refer back to this map when reading the information below.

The Border between Europe and Asia

Asia and Europe are considered different continents BUT they are on the same tectonic plates.

Both these continents are directly connected by land as there is no sea between them and that’s the reason why there is no actual border between Asia and Europe. The boundary between the two continents is just merely a historical and cultural construct. They aren’t set it stone because they have changed over history and will continue to do so.

The boundary between Asia and Europe is often defined to follow the following route:

However, controversies exist over the exact boundary and some countries are in both continents while others are entirely in one continent.

These transcontinental countries include (but are not limited to) Turkey, Russia, Kazakhstan, Georgia, and Azerbaijan.

Most of Russia’s territory belongs to the Asian continent, but most of the country’s people reside in Europe. The historical heartland of Russia also lies in Europe. The country expanded its territory into Asia due to imperial conquests. But since Russian territory now covers parts of Europe and Asia, the country includes people and cultures from both continents.

Researchers mostly use Eurasia (combining Asia and Europe into one continent) for their work.

Russia is a study of its own so we won’t cover it much just yet. The Border between Africa and Asia

Today, the border between Africa and Asia is centered around the Sinai Peninsula, which is considered part of the territory of Egypt.

The peninsula is connected to both the Asian and African continents by two separate isthmuses of land.

The area west of the Isthmus of Suez on the Sinai Peninsula is considered part of the Asian continent. 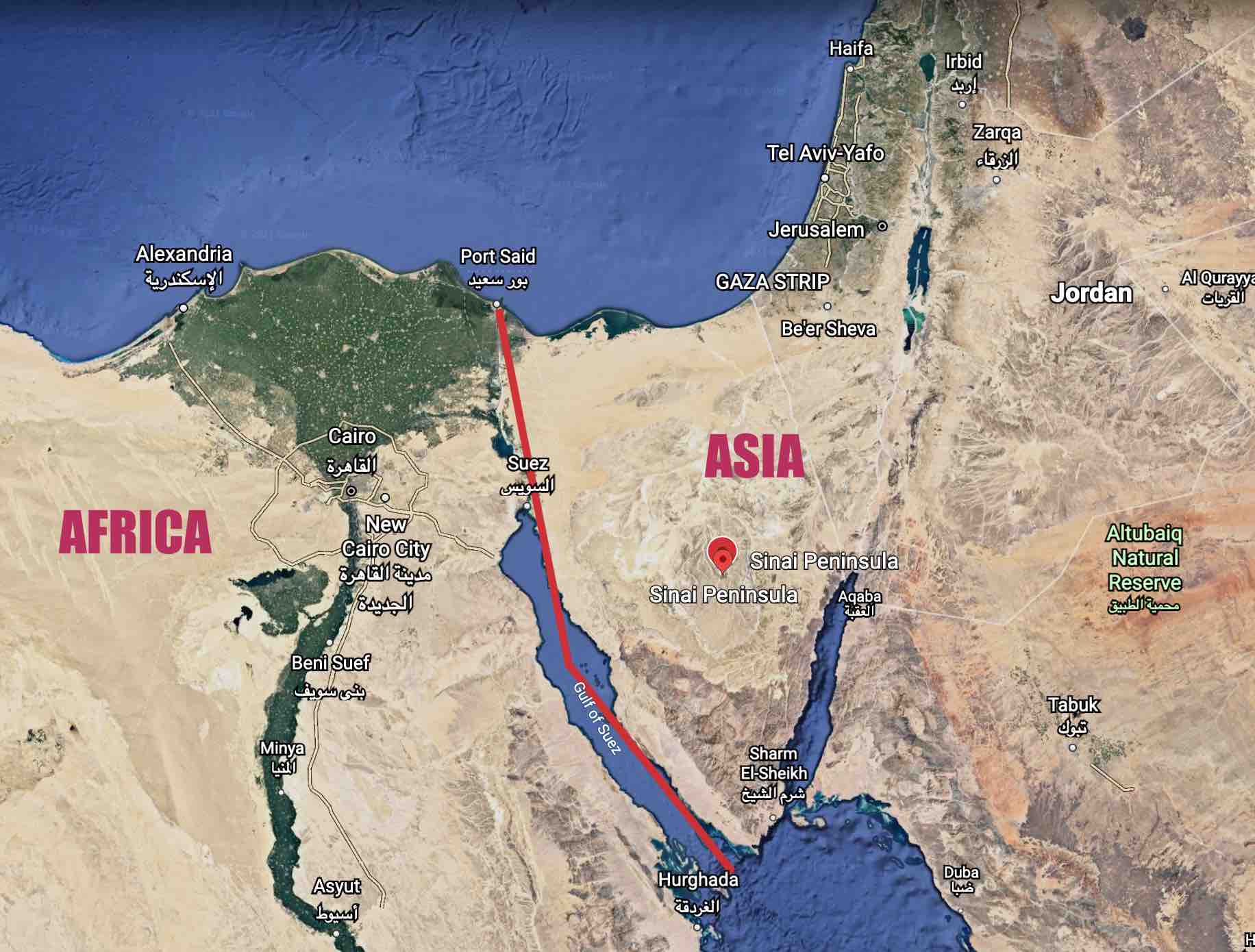 Activity One – All the Countries!

Using the list of countries provided, draw their approximate boundaries and label them on the map.

You might want to use different colours to show the regions. This will come in useful for activities three to eight.

Add some major bodies of water and natural features, along with major cities.

Use Google Earth to help you locate the countries.

You can also refer to Middle East Day.

Note: some of these are not classified as countries but as autonomous regions (Hong Kong, Macau, Taiwan). Much of this is to do with Chinese politics. Don’t worry about it right now.

Because of the wide region and transcontinental nature of Asia, it includes a whole breadth of language families. Many countries have ethnic groups that speak languages other than the official language of the country. 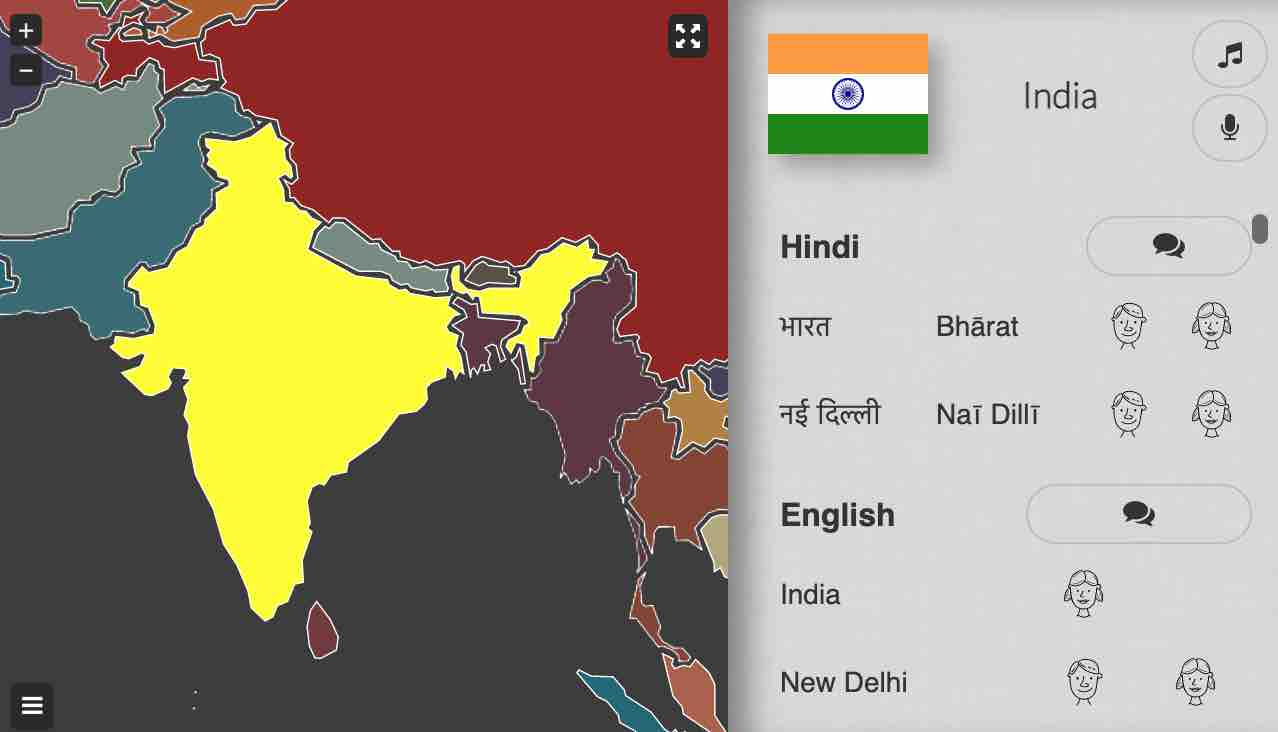 Try a few lessons in an Asian language on Transparent Language

Culture: Oral poetry is very famous in Central Asia. It was dated back around 1000 year ago.

History: Many areas in Central Asia were dominated by the Russian Empire and Soviet Union in the mid 19th century to late 20th century. Other historical areas of important study could be: The Persian Empire, The Silk Road, and nomadic life.

Climate & Biome:The shrub land, savannah, and grassland are included as the largest biomes in Central Asia.

For more info see the video about North Asia.

The Epic of Manas is a traditional epic poem of the Kyrgyz people. Composed and sung entirely in oral form by various singers throughout the centuries. As nomads, the Kyrgyz had no written language.

Consider how an epic poem would be memorized by so many and for so long. Now find a poem of your own in a book or from here.  Memorise  just one verse of it and repeat your verse to an audience. Feel free to add music or sing it!

Religion: South Asia has the world’s largest population of Hindus, Jains and Sikhs, about 510 million Muslims, over 25 million Buddhists, and around 35 million Christians.

Popular Culture: One modern cultural phenomenon of South Asia is Bollywood. The name Bollywood is a combination of Bombay (Mumbai’s old name) and Hollywood and it is often used to summarize all movies produced in India. While Bollywood is the center of the Hindi movie industry, movies are made in other regions and local languages as well. Bollywood produce more movies and sell more than 4 billion movie tickets yearly almost twice more than the Hollywood, but they don’t currently make nearly as much money.

Food: Chapati, food flavoured with strong herbs and spices and ghee, ginger. Pork is considered as a taboo food item by all Muslims and is avoided by many Hindus.

History: The colonial period in South Asia began during the 16th century with the arrival of the Europeans in Asia and ended in the 20th century. The first European to arrive in the region was a Portuguese trader. The Dutch arrived shortly after the Portuguese and ruled the Ceylon (currently Sri Lanka) for 137 years. The British later occupied the Calcutta and Madras regions in the 17th century. The arrival of the French in 1674 led to competition between the British and French which was also influenced by their wars in Europe. After the defeat of French in 1757 in Bengal, British became the dominant power in the Indian peninsula. The colonial period ended in 1947 when India was partitioned into India and Pakistan.

Climate & Biome: The climate of this vast region varies considerably from area to area from tropical monsoon in the south to temperate in the north. Southern parts are mostly hot in summers and receive rain during monsoon periods. The northern parts are also hot in summer, but cooler in winter. The mountainous north is colder and receives snowfall at the higher Himalayan ranges.

Prepare a simple Indian-style small curry sauce that could be added to vegetables / beans / protein (for example tofu).

Grind up some of the following:

To turn this into a curry simply fry up some vegetables and tofu and add the curry when they are tender. Heat and simmer for a short time.

Ethnicities: Chinese, Tibetan, Japanese, Korean, Mongolian. There is a population of very dark-skinned people in Southeast Asia such as the Andamanese.

Religion: Buddhism is the most important religion in Southeast Asia being the second largest in this region after Islam with approximately 205 million Buddhists today. Almost 38% of the world’s Buddhist population resides in Southeast Asia. Other religions in the region include: Hinduism, Animism, Christianity, Confucianism, and Taoism.

History: The term “Southeast Asia” was first used in 1839 by American pastor Howard Malcolm in his book Travels in South-Eastern Asia. Pottery culture has ancient origins in Southeast Asia. Sophisticated metalworking (bronze) and agriculture (rice) were being practiced by the end of the 3rd millennium BCE in northeastern Thailand and northern Vietnam, and sailing vessels of advanced design and sophisticated navigational skills were spread over a wider area by the same time or earlier.

The weather in Southeast Asia is somewhat predictable. Most countries experience two distinct seasons: wet and dry. Unless you’re up in elevation, this region of the world sits close enough to the equator to stay warm throughout the year. Tropical or not, nights often feel cool after a day of scorching temperatures. In Indonesia, Malaysia & Singapore the fabric most common to both countries is the Batik. The term “batik” is an Indonesian-Malay word, believed to be related to the Malay word “titik”, which means ‘point’, ‘dot’ or ‘drop’. The “drop” action refers to the process of dyeing the fabric by making use of a resist technique: covering areas of cloth with a dye- resistant substance (usually hot wax) to prevent them from absorbing colors. This technique is has been taught for over a thousand years.

We are going to make a batik-style cushion cover using these activities here and below:

How to Use Tjantings to Make a Batik

Ethnicities: The major ethnicities of East Asia are: Han, Yamato, and Korean.

Popular Culture: Music and dance were closely associated in the very early periods of China. Some of the oldest written music dates back to China. There are many musical instruments that are integral to Chinese culture. China is one of the main birth places of Eastern martial arts.

Food: Chinese Tea culture refers to how tea is prepared as well as the occasions when people consume tea in China. Tea culture in China differs from that in European countries. In addition to being a popular beverage, tea is used in traditional Chinese medicine, as well as in Chinese cuisine.

History: The dominant influence historically has been China, however, Japanese controlled Vietnam, Hong Kong, Taiwan, eastern China and Korea during the Second World War. Korea was independent after Japan was defeated during the war. Taiwan became a part of People’s Republic of China after the Chinese Civil War.

Climate & Biome: The weather is similar to that of the United States. Both are at the same latitude, and both have similar climate zones. The climate ranges from sub-arctic to tropical-wet.

To bring Chinese Tea Culture together with Southeast Asian food culture we are going to make some boba for some boba tea.

Here is the recipe!

Religion: Islam is the most practiced religion across the region although other major religions originated in this region including Christianity and Judaism.

History: Catch up on the epic history of the Middle East here.

Climate & Biome: Many of the West Asian countries are desert.

To show the main facts about a country we can create an infographic.

Here are a few about Laos.

Choose a country in the Asian continent from the East, South, Southeast, or Central regions.

Create a visual infographic for your country.

Include  some of the following:

In which Asian country do you belong?

The diversity of the Asian continent from Siberia to Turkey to India to Indonesia is a lot to digest. If you could visit one, which would suit you best?