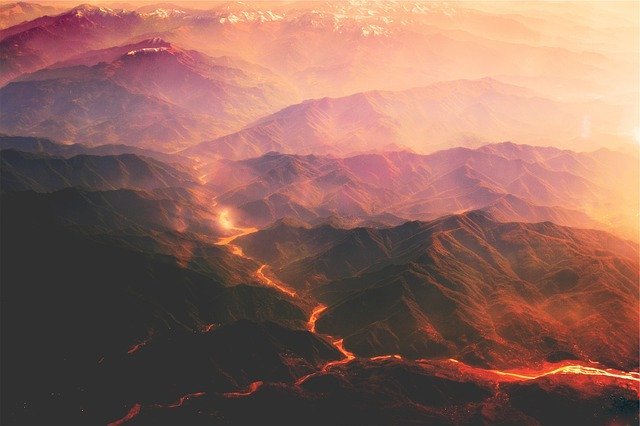 To develop understanding of:

A vegetation belt describes the plant life as a whole within a certain area. An area of the planet characterised by certain flora (plants) due to climatic conditions. Some of them don’t have very much vegetation at all.

A river is a large, natural stream of flowing water. Rivers are found on every continent and on nearly every kind of land.

A mountain is a large landform that rises above the surrounding land in a limited area, usually in the form of a peak. A mountain is generally steeper than a hill. Mountains are formed through tectonic forces or volcanism. These forces can locally raise the surface of the earth.

A volcano is a rupture in the crust of a planetary-mass object, such as Earth, that allows hot lava, volcanic ash, and gases to escape from a magma chamber below the surface. Earth’s volcanoes occur because its crust is broken into 17 major, rigid tectonic plates that float on a hotter, softer layer in its mantle.

An earthquake (also known as a quake, tremor or temblor) is the shaking of the surface of the Earth, resulting from the sudden release of energy in the Earth’s lithosphere that creates seismic waves. Earthquakes can range in size from those that are so weak that they cannot be felt to those violent enough to toss people around and destroy whole cities.

Identify at least one of each of the physical features above on a world map.

Explanation of each feature given (50 points)

A Haiku is a very short form of Japanese poetry in three phrases.

Traditional haiku often consist of 17 on (also known as morae though often loosely translated as “syllables”), in three phrases of 5, 7, and 5 on, respectively.

An old silent pond…
A frog jumps into the pond,
splash! Silence again.

Choose one of the physical features from today and write a haiku about it.